To measure the effectiveness of a biochar activated compost against a compost control as a medium for growing Marmande Superprecoce tomatoes by logging plant height and tomato crop yield (inc weight and fruit number).

We have completed a small trial growing Marmande Superprecoce tomatoes in a raised bed 1m by 1.5 m. We divided the bed into four equal sub-plots, two for control plants and two for the trial. The two control sub-plots were diagonally adjacent and filled with compost. The trial sub-plots were diagonally adjacent and filled with the biochar-compost mixture described below. This arrangement attempted to control for light and shelter effects. The bed had a polycarbonate screen around all four sides and initially a top from the same material. We removed the top during most days and replaced it overnight. The plants grew very well under these conditions. When they exceeded the height of the walls, we did not use a covering.

A regime of watering and later feeding all sub-plots together ensured they all experienced the same conditions. We used no chemicals other than tomato feed on the plants during the trial.

During the trial we measured the heights of the plants from soil level to tip of main stem. Once the fruit began to form we measured the number of tomatoes greater than 25mm diameter from time to time during the growing season. We monitored the harvest carefully recording and weighing each tomato. At 75% of the harvest taken the yield in weight of the trial plots is ca 50% more than the control plots. That’s a satisfying increase.

The biochar preparation and seedling stage

We made biochar by charring short lengths of round wood in a small charcoal maker. A fire of dried wood gave us the heat source for the charcoal maker and we continued until all off gassing had ceased, about 2.5 hours. We extracted the maker from the fire and quenched it with cold water until the container was cool to touch.

We then removed and crushed the biochar. The biochar was then in small pieces (ca <1/2″ or 12mm) together with powdered material.

For growing plants we conditioned this biochar by mixing with moist homegrown garden compost in a 1:9 by volume ratio. In our tomato trial we used a 14 day inoculation period, leaving the biochar-compost mixture covered for the period. We checked periodically to make sure the mixture remained moist during the inoculation, so nothing further was added.

We germinated and grew eight Marmande Superprecoce tomato plants indoors in John Innes seed compost at approximately 20ºC. We transplanted them into the sub-plots when they were approximately 20cm tall . 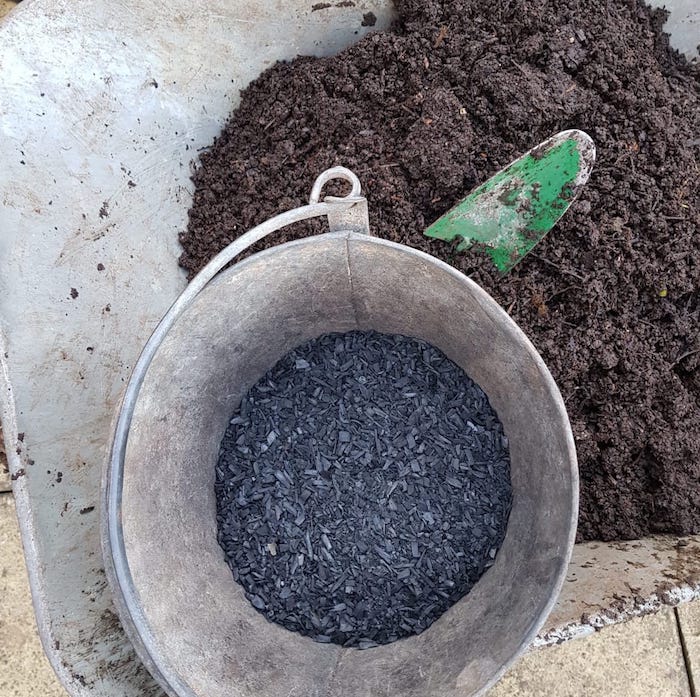 Gallery of tomato trial from bed preparation to fruit ripening

After twenty separate small harvests we had reached the end of the ripening season for our four control and four trial plants.

We found the following:

Improvement in yield 49% for the trial plants

Average weight of tomatoes for the trial plants 105g: 6% more than the controls

Increase in plant height 18% for the trial vs control plants

A further 480g and 790g green tomatoes were removed from the plants at the end of the ripening period, 21st October.
At maturity, 12th September, the heights of the plants were measured. For the controls the average height was 148cm for the trial plants it was 175cm an 18% difference in height.

At the end of the trial the plants were carefully removed from the beds. A spade was used to make four cuts on all sides evenly from the main stem. The spade was used to carefully loosen the soil and the plants were then lifted vertically to remove plant and (near) root system. All eight plants were carefully lid out on the ground so that comparisons could be made. The root systems were strikingly different with much larger root ball for all the trial plants. After taking photos the plants were carefully “dunked” in water to remove the soil. The control plants washed fairly clean with little effort. The trial plants proved impossible to clean up thoroughly. All the trial plant roots were decorated with black particles mostly of biochar. It was a striking contrast. On inspection the roots were in many cases seen to be growing into the biochar and in some cases multiple root sections grew into and out of the same char particle. This clearly demonstrates that tomatoes at least “love” biochar and hung on to it.

Height – After two months of growth the biochar-mix grown plants were on average 10% taller. Further none of the controls was taller than the shortest biochar-compost plant. This height difference increased as the trial proceeded and after five months it was 18%. At this point, all the biochar-compost plants were 4cm or more taller than the controls.

Water retention – When investigating the quadrants days after any watering it was clear that the biochar activated compost was still ‘wet to touch’. It had remained moist compared to a much dryer compost in the control quadrants.

Weeds – Visually it was clear that fewer weeds germinated and grew in the biochar activated compost throughout the full growing period.

In this trial we can conclude that the biochar-compost mix produced bigger, healthier plants that produced higher volumes of fruit that resulted in a heavier crop yield in total.